Hanover, October 19, 2021. Extreme E is on its way to Europe. After the dramatic start in Al-Ula, Saudi Arabia, the technically challenging course in Senegal, and the icy conditions of Greenland, the spectacular new off-road racing series will start on October 23 and 24 in Sardinia. The teams will once again face completely different driving challenges on this island around 200 kilometers off the coast of Italy. Using fully electronic ODYSSEY 21 cars, the races will be held at Capo Teulada in Sulcis-Iglesiente, a historic area in the south-west of Sardinia. The Cape of Teulada is the southernmost point of Sardinia and a military restricted area. Over 40 kilometers long, this idyllic stretch of coast is off limits for most of the year. Visits to the hinterland are generally prohibited. The west side of the cape is a craggy landscape dotted with bizarre rock formations. Tires and vehicles are put to the test in these harsh conditions. You should be prepared for stormy winds in particular. Pro Sieben MAXX and ran.de will broadcast the motor sport spectacular live from this forbidden paradise on both days. The qualifying rounds start on Saturday at 11:00 a.m and the semi-final will take place on Sunday from 12 noon. The Enel Island X Prix decider will take place on Sunday at 4:00 p.m. We are looking forward to seeing which of the nine teams will be best equipped to deal with the tough conditions both on and off the track.

“This coastal region is often referred to as the Caribbean of the Mediterranean,” explains Sandra Roslan, who is responsible for the project at tire manufacturer Continental, one of the event’s founding partners. “Unfortunately, the effects of climate change can also be felt in this European island paradise – particularly global warming in the ocean. In recent decades, however, flood plains, coastal erosion and the increasing encroachment of desert in parts of the island have also become a growing problem.” Forecasts indicate that parts of the coastal area of Oristano in the west of the island, where 35,000 people live, could be under water by 2100. “That’s why it is only right and proper for us to use the Extreme E racing series to not only draw attention to the problems in remote regions, but also to point to what is happening on our own doorstep.”

In the competition between the motorsport giants from very different disciplines, the Rosberg X Racing team goes to the start as leaders in the overall rankings with World RallyCross Champion Johann Kristoffersson, and former Australian Rally Champion Molly Taylor. Rally World Champions, Sébastien Loeb and Cristina Gutiérrez, from Lewis Hamilton’s Team X44 were stage winners at Dakar this year, and lie only nine points behind. Timmy Hansen and Catie Munnings from the Andretti United team are just eight points behind in third position, ahead of Formula 1 champion Jenson Button and Continental test driver Mikaela Åhlin-Kottulinsky. This means that the initial situation could hardly be more exciting immediately before the season finale.

All the teams are starting with E-SUVs which have been christened ODYSSEY 21. These extraordinary vehicles have a length of 440 cm, a width of 230 cm and a height of 186 cm, roughly the same dimensions as commercially available SUVs, and even the wheel base of 300 cm also sounds quite normal. These SUVS though are really powerful. Manufactured by racing manufacturer, Spark Racing Technology, they boast an electric equivalent of 544 hp and a weight of just 1,650 kilograms. By way of comparison, the average Dakar Rally vehicle has around 300 hp and weighs more than two metric tons. The acceleration values are equally impressive. Powered by two electric motors, the power buggies hurtle to 100 km/h in just 4.5 seconds. The powerful SUVs can also easily master slopes of around 55 degrees. To handle such blazing power safely on the course under all circumstances and in different climate zones, all the teams in the racing series have placed their trust in the 37-inch CrossContact Extreme E racing tire specially developed by Continental for these situations. 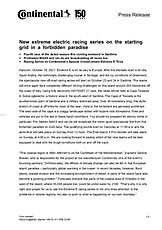 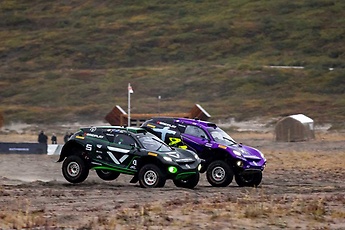