Hanover, December 2021. The title’s on the line. After the dramatic start in Saudi Arabia, the technically challenging track in Senegal, the ice of Greenland and the rainy racing on the coast of Italy, the spectacular new off-road racing series will start on December 18-19 leading to the season finale in England. On the southern coast, the first champion in Extreme E history will be decided in the county of Dorset. The Jurassic Coast – named after the numerous limestone and chalk formations – stretches over more than 100 kilometers between Exmouth and Bournemouth and has been a UNESCO World Heritage Site since 2001 due to its geological significance. The New Forest National Park is nearby. The races will be held with the fully electronic ODYSSEY 21 bolides on a military base. Clay, sand, gravel and mud will dominate the course. “At temperatures just above freezing, gusty winds and humidity of currently over 90 percent, the teams have to deal with uncomfortable conditions,” says Sandra Roslan, who is responsible for the project at founding partner and tire manufacturer Continental. “In view of the extremely varied terrain, tires and vehicles are once again put to the test.”

A combination is expected of fast downhill sections with narrow, winding sections and wide areas that offer space for different ideal lines and overtaking opportunities. The race will be broadcast on various European TV stations live on both days. The qualifying rounds start on Saturday at 11:00 a.m and the semi-final will take place on Sunday from noon. The Jurassic X Prix decider will take place on Sunday at 4:00 p.m. The final was originally scheduled to take place in Tierra del Fuego, but had to be moved to Europe due to the global COVID-19 situation.

In the race between motor sports giants from a wide range of disciplines, the race for the title has become a duel between the Rosberg X Racing team and Lewis Hamilton’s X44 team. World rallycross champion Johann Kristoffersson and former Australian rally champion Molly Taylor top the overall rating with a 16-point lead over world rally champion Sébastien Loeb and Cristina Gutiérrez, stage winner of this year’s Dakar Rally. This may look like a comfortable margin at first glance; but it isn’t. Don’t forget, each of the top five teams was able to collect more than 20 points from the previous Island X Prix on Sardinia. Overall, Hamilton’s X44 team even picked up 29. Behind the overall leaders, four teams have justifiable hopes for third place on the podium. Timmy Hansen and Catie Munnings from the Andretti United team are just a single point ahead of Kevin Hansen and Continental test driver Mikaela Åhlin-Kottulinsky from Formula 1 champion Jenson Button’s JBXE team. The ABT Cupra XE team is nine points behind ABT Cupra XE with Mattias Ekström and Jutta Kleinschmidt, who in turn finished just five points ahead of Carlos Sainz and Laia Sanz from ACCIONA | Sainz XE team.

All the teams are starting with E-SUVs which have been christened ODYSSEY 21. These extraordinary vehicles have a length of 440 cm, a width of 230 cm and a height of 186 cm, roughly the same dimensions as commercially available SUVs, and even the wheel base of 300 cm also sounds quite normal. These SUVS though are really powerful. Manufactured by racing manufacturer, Spark Racing Technology, they boast an electric equivalent of 544 hp and a weight of just 1,650 kilograms. By way of comparison, the average Dakar Rally vehicle has around 300 hp and weighs more than two metric tons. The acceleration values are equally impressive. Powered by two electric motors, the power buggies accelerated from a standing start to 100 km/h in just 4.5 seconds. The E-SUVs can also easily overcome a slope of around 55 degrees. To keep such blazing power safely on track under all circumstances and in different climate zones, all the teams in the new offroad racing series have placed their trust in the CrossContact Extreme E 37-inch racing tire specially developed by Continental for these situations. 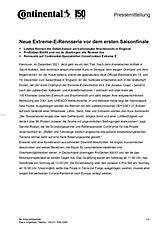 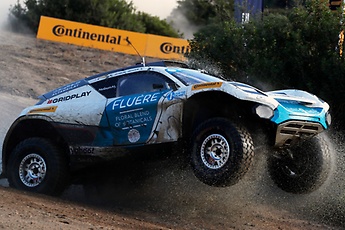