Hanover, July 2020. A common focus on both car tyres and bicycle tyres – at the 108th Tour of France, the Continental brand, in its dual function as a supplier and one of the five main sponsors, attracted the highest media attention worldwide. 1,800 accredited journalists, 100 TV stations, 7,000 broadcast hours – roughly 1.4 billion people followed the Tour de France 2021 on TV, and up to twelve million viewers were watching live along the route when local hero Julian Alaphilippe took the overall leader’s yellow jersey in the first stage, when Ben O’Connor, despite the harsh weather conditions, was the first to make the ascent up the Montée de Tignes, more than 2,000 metres above sea level, and when Wout Van Aert won the prestigious final sprint at the Champs-Élysees. With the Ineos Grenadiers, Bahrain Victorious, Movistar, Groupama-FDJ, Intermarche – Wanty – Gobert Materiaux and Arkea-Samsic, six of the professional teams benefited from the quality and reliability of the hand-made high-tech racing tyres from Korbach, Hesse, once again this year. A total of three of the ten best-placed riders took part in the race on Continental tyres. 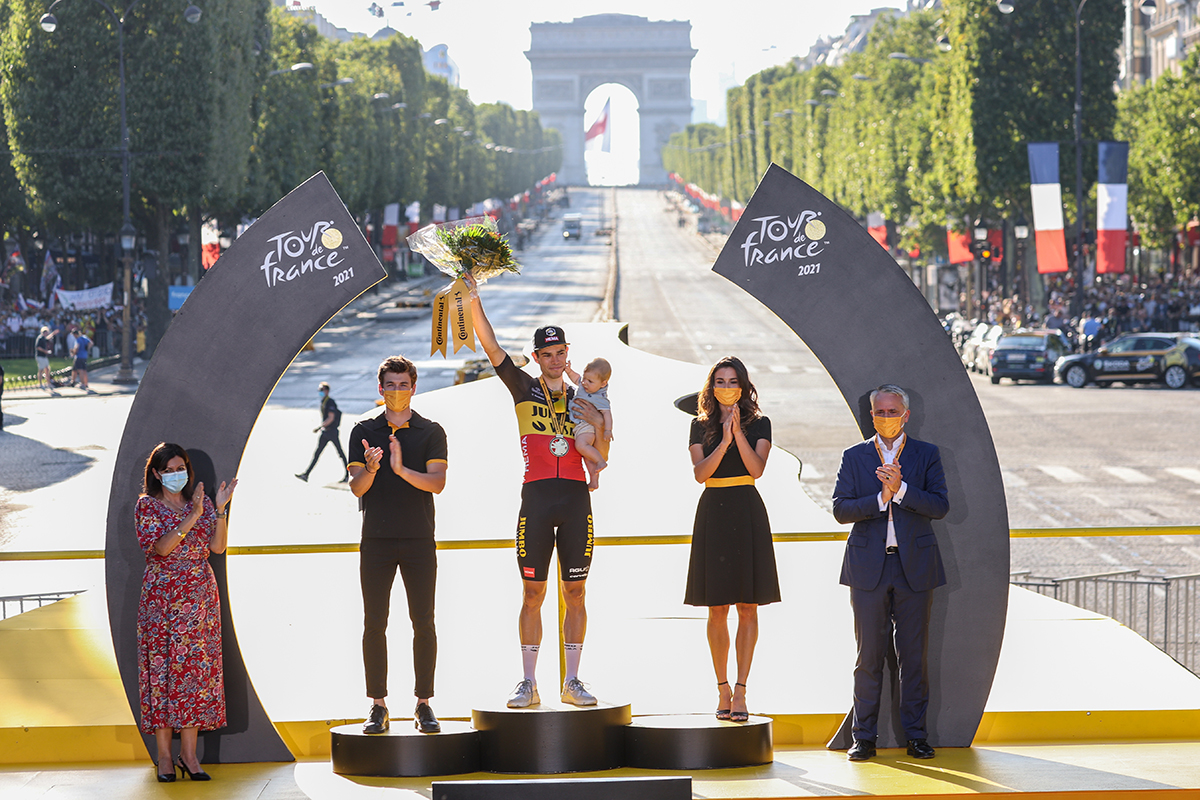 Originally exclusively available as a Special Edition 2020 and marked with the signet of the Tour de France, Continental is responding to ongoing customer demand by now making the Grand Prix 5000 cream a permanent fixture in its range.

While the peloton continued to wear yellow, green, white and polka dot jerseys, Continental added a rich cream tone to the colour spectrum. The new range of colours for the Grand Prix 5000 thus creates more options for an individual styling setup, without having to accept any compromises in performance.

The colour variants are equipped with the same technology as the core model Grand Prix 5000. The Active Comfort Technology is integrated in the tyre design and absorbs vibrations, Vectran for high-quality puncture protection, and LazerGrip for increased curve grip. Continental’s outstanding Black Chili compound offers the ideal balance of grip, mileage and low rolling resistance.

As in previous years, the Tour organisation’s official vehicles also drove through France on Continental tyres. The tried-and-tested PremiumContact 6 was used once again here. The high-tech product for compact, mid-range and premium-class vehicles with speed ratings of up to 300 km/h combines the properties of a comfortable saloon tyre and a tyre for sports models of passenger cars. It combines comfort, precise steering response, maximum safety and positive environmental qualities. This means that the PremiumContact 6 is equally ideal for the requirements of accompanying vehicles winding downhill at breakneck speed on rain-soaked roads as it is on extended flat stages or in sweltering heat on the way up to mountain summits above the vegetation line. All the car tyres used were produced locally at the French plant in Sarreguemines. Before the start of this year’s Tour de France, all drivers of the official Tour de France vehicles received safety training from Continental, and the cars’ tyres were also checked regularly.

Next year too, Continental will once again be there at the starting line as a supplier and sponsor of the Tour de France. In 2022, the world’s most popular bicycle race will begin on 1 July with three stages in Denmark. The starting shot will be in Copenhagen. As always, the Tour of France will come to an end after 21 days of racing in Paris. The route profile will be announced in October.