Building on the success of the debut year in 2021, Extreme E Season 2, “The Race For the Planet,” promises to be gripping at a whole new level, on and off the course.

While the ten teams have been preparing intensively for the big desert race in Neom since Nico Rosberg’s “Rosberg X Racing” (RXR) season victory, many factors had to be overcome last weekend in order to rack up maximum points in the season’s first X Prix.

The teams and their ODYSSEY 21 electric SUVs faced new and unexpected challenges in the varied desert landscape of Neom in north-west Saudi Arabia. With its glowing red-orange dunes and towering sandstone formations, the desert makes a highly picturesque first impression. With its pleasant climate and temperatures around 20 degrees Celsius, nothing seemed to point to the problems ahead.

However, a short flight over the 6.9-kilometer race track reveals the tough and unusual terrain conditions in the various sections. At the weekend, soft desert sand, loose flying stones and pothole-like wash-outs, for example, made for spectacular images. But it was above all the so-called “camelhair moguls,” ramp-like rock formations that were a completely new challenge for the drivers and their E-SUVs, causing repeated, breathtaking airborne moments during the race.

The first problems occurred during the qualifiers. The dry desert sand threw up dense plumes of dust behind the speeding cars, making it almost impossible for drivers in the slipstream to see anything. For this reason, the first qualifiers of the season were held in the form of individual drives.

After the first test rounds, Tanner Foust from the newly-joined McLaren XE team, visibly relieved to drive back in one piece, commented, “Now I know why they call it ‘extreme’. That was madness.” Even so, he was looking forward to completing a few more laps.

In the subsequent Crazy Race, driver Lance Woolridge in particular had trouble keeping control of the steering wheel. As he raced through the first bend and made a huge jump, the Veloce racing car turned sideways. The subsequent damage took him out of the competition. “Extreme E is a rally under the toughest conditions. Spectacular stunts and breathtaking landscapes – that’s what accounts for its thrill,” explains Timo Röbbel, head of Public Relations Tires EMEA at Continental Tires.

The debut team from McLaren XE bagged the hotly-contested place in the final. But the promising newcomers also had their plans upset at the end of the first round of the final with a serious accident involving driver Tanner Foust. The RXR team triumphed, emerging from the weekend as the winner of the Desert X Prix.

After his team’s renewed victory, Johann Kristoffersson said, “It feels really good, every week is feeling good. Every time we take part in a race, we aim to win, but the competition is so tough this year, especially now that the bar has been raised even higher with the participation of McLaren. We learned a lot last year, but it has now become even tighter and we need to work even harder.”

With each race, a huge tent city rises out of nowhere. An area of around 2–3 soccer fields gives all involved space for supply and logistics centers, a media center with interview areas, and control stations for race management, administration, team managers, and organizers. The drivers’ camp comprises countless tents and pit areas for the ten teams. Medical tents, towing and safety cars, fire fighters and the Continental tire tent guarantee the necessary safety at the most remote locations.

The Continental tent delivers important tire services and supports the organizers and teams. To improve traction on the soft desert sand, one requirement is a huge reduction in tire pressure. Before and after each race, the Continental technicians carefully check the tires of all the teams using a built-in digital radio sensor, collecting important data for significantly increasing the performance and the necessary resistance capability of the tires.

“We incorporated a wealth of new knowledge about CrossContact Extreme E from the first season into enhancements for the next generation, with an even greater focus on the use of sustainable and recyclable materials,” says Nels von Schnakenburg, technical manager for Extreme E at Continental. The development teams not only significantly improved the tire’s performance, but also increased the share of renewable and recycled raw materials to one third. Manufacture of the current variant of the CrossContact Extreme E already includes the incorporation of 60 recycled PET bottles.

But this development does not stop at motor sports. Regarding Continental’s sustainability strategy, Timo Röbbel explains that this tire development will also affect the future of conventional tires.

As in the first year of the competition, the Extreme E schedule does not only provide time for races, but also for supporting sustainable projects. To combat climate change, work was carried out jointly with the Ba’a Foundation in Neom – an organization working to protect endangered species, natural living spaces, and historic sites, as well as renaturing and reforestation projects.

For the teams, the Island X Prix will continue on May 7 with the winding coastlines and untamed island scenery of Sardinia, Italy. “The terrain challenges are completely different there. We’re moving from sand to solid and rough rocks. The stress factor is rising for the drivers and vehicles; there could be stone impacts, and damaged or burst tires,” Röbbel continues.

The schedule includes three more destinations over the course of the year: 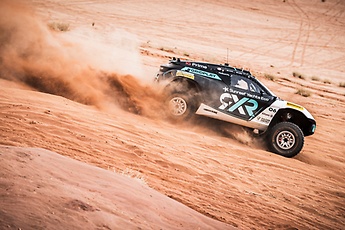 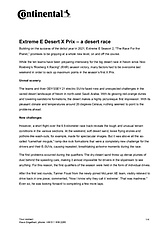