Your Continental tires come with the extended warranty

ContiProContact's PROactive Edge Technology pushes the limits of innovation. The patterned edge design yields increased grip and a quiet ride. The ContiProContact gives you the confidence to drive your high-performance vehicle to the level you want.

Each ContiProContact tire has at least 800 pattern edges in its tread. The more edges a tire has, the more grip it has. PROactive Edge Technology is more than just the quantity of edges in the tread; it is also the shape of the pattern edges. Edges are most effective when they are perpendicular to the direction of travel. The engineers at Continental designed the edges in an arched pattern so that there are more active edges in the contact patch. And no matter what the direction of travel is, there are always edges with the right orientation.

Since your tire contact patch is comparable to the size of a postcard, it is critical to maximize the contact patch interaction with the road. And with maximum edge contact in every direction of travel, tire traction will be optimized in dry, wet, and snowy conditions. Knowing that your tires have been designed for superior traction is especially comforting when you need to make those unexpected sharp turns.

By adding a curved design to the edges, the pattern elements transfer effortlessly from edge to edge. Tires with straight edges have a more harsh transition, which creates tire noise.

Owner's of luxury high-performance vehicles place high demand on performance , control, and safety in wet conditions. The PROgressive Groove Ramp of the ContiProContact incorporates features to meet the driver's demands. This new groove geometry has a wider and progressively rounded groove base that is present in every groove, which provides added lateral support and promotes efficient water evacuation. Drivers can be confident when cornering knowing that the PROgressive Groove Ramp is in action.

When cornering, the load increases in the shoulder. The unique ramp shape promotes less block deformation and the blocks are able to retain stability while cornering. To the driver, the PROgressive Groove Ramp also means enhanced handling and steering response. As a tire turns or brakes, forces are applied to each tread element. These forces cause the elements to shift. Too much movement causes a drop in the performance of the tire, particularly in handling and cornering. The PROgressive Groove Ramp of the ContiProContact reduces detrimental shifting of the tread elements.

The Controlled Sipe Interaction of the ContiProContact creates an interlocking of the tread blocks' elements via the curved sipe design. This interlocking controls the increased chance of deformation of the blocks. As the tire goes through a turn or any other lateral force is applied, the blocks interlock and create a feeling of stability and precision.

The benefit to the consumer is responsiveness without sacrificing wear.

This can be illustrated by taking three curved shapes, A, B, and C, and stacking them together. If you try to remove shape B, it is very difficult because A and C cause a locking effect.

Conversely, with three straight objects, 1, 2, and 3, shape 2 can be easily removed because the locking effect is not present.

Confidence on the Road

The SSR system is a runflat technology developed by Continental especially for low section tires, which still keeps the tires compatible with all standard rims. The SSR principle is based on a self-supporting reinforced sidewall. In case of a puncture, this prevents the sidewall from being crushed between the rim and the road, and the tire from slipping off the rim, which makes a spare tire obsolete. Not having to carry a spare tire means a reduction in weight, which improves fuel efficiency. It also adds up to 80 litres of free space in the trunk. Fitting on four positions is highly recommended, if not yet mandatory by law and a tire repair is not allowed. 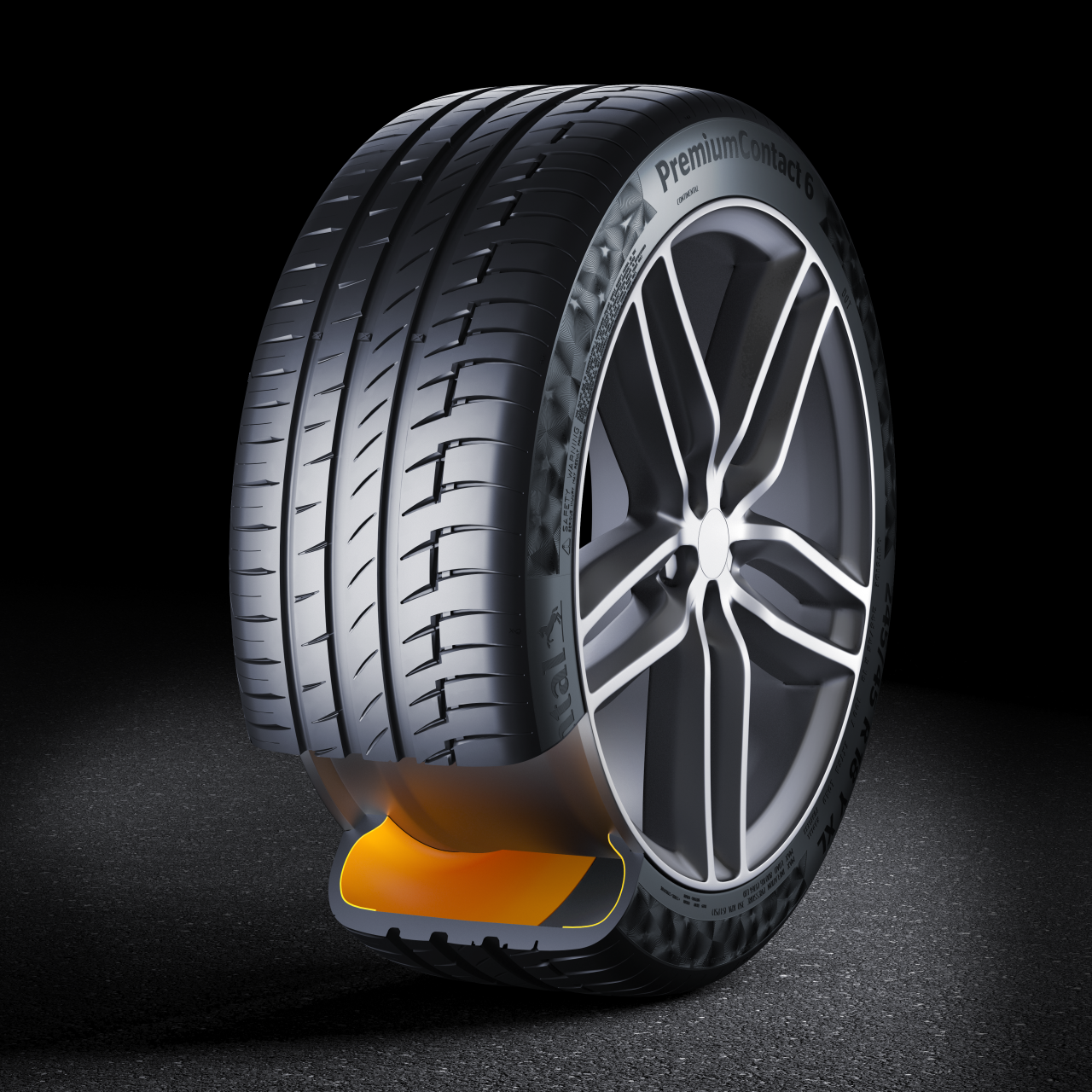 ContiSeal™ is a technology developed by Continental designed to seal a damaged tire tread. In case of penetration by foreign objects such as nails, there is no need for immediate roadside tire changes, and holes remain sealed even if the puncturing object becomes dislodged. ContiSeal™ is a sticky, viscous sealant layer. It is applied to the inside of the tire in the tread area. ContiSeal™ seals 80% of all tire punctures and therefore reduces the risk of flat tires. ContiSeal™ tires are marked clearly with a symbol on the sidewall and are compatible with all commonly available rims. We are happy to answer all your questions and support you with our tire expertise.