Extreme E: Åhlin-Kottulinsky wants to inspire – and the championship

Swedish racing driver Mikaela Åhlin-Kottulinsky is already in her second season of Extreme E and, this time, she has set her sights firmly on the title. The new member of Rosberg X Racing talks about the challenges of the extreme race courses, local sustainability programs and her big goal.

“We could jump, we could fly”

Racing is in Mikaela Åhlin-Kottulinsky’s blood. Whether her mother Susanne Kottulinsky, her father Jerry Åhlin, her brother Fredrik Åhlin or her grandfather Freddy Kottulinsky, who won the Paris-Dakar Rally: All of them gained experience and celebrated successes behind the wheel. At the Extreme E series, the 29-year-old rally driver is picking up directly where they left off.

“When I got to the first course in Saudi Arabia during the first season in 2021, I thought, ’What have I gotten myself into?’” Mikaela Åhlin-Kottulinsky vividly remembers, “I thought, ’This is crazy.’ I’d never done anything like it. I mean, it was steep uphill, downhill, everything. And I didn’t know yet what the car was capable of.’”

That race took place over a year ago now and the 29-year-old now knows exactly what “Extreme E” means: “It worked out very well in the end. We could jump, we could fly, we could go sideways. We could do everything necessary to deal with these really extreme environments and turn them into great races.”

This is exactly what Åhlin-Kottulinsky wants to carry on doing. After competing for Jenson Button’s “JBXE” team last season, she is now driving for “Rosberg X Racing.”

“I’m very grateful that I was given the opportunity at JBXE because I learned a lot,” Åhlin-Kottulinsky explains, “When they sat me in the car, I didn’t have much off-road experience, they didn’t know what I could achieve.”

But she seized the opportunity and attracted the attention of Nico Rosberg’s team – the reigning Extreme E champions – with her performance. Her goal after the switch is clear: To win the title with “Rosberg X Racing.”

“You have to be extremely alert”

At RXR, Åhlin-Kottulinsky forms a duo with Johan Kristofferson, which immediately made an impression in the first race of the second season (once again in Saudi Arabia) where they reached a top ranking.

The result of good cooperation: “Teamwork is very important. Many people think motorsports is a one-woman or one-man sport, but it isn’t,” Åhlin-Kottulinsky explains. It’s much more of a team effort, she says, adding, “From the analysts, to the mechanics and engineers, to Johan and me. We all try to boost each other’s performance.”

And that’s urgently needed, because Extreme E throws fierce obstacles at the whole field. The courses are not exactly easy to master – which was also evident in the Saudi Arabian desert at the start of the second season. “It’s really tough,” says Åhlin-Kottulinsky: “Everything is so unfamiliar and the course changes a lot from session to session. So you have to be extremely alert to tackle everything that crops up on the course.”

The Odissey 21, Extreme E’s electric rally car, is also subjected to tough conditions. In fact, Åhlin-Kottulinsky even had a hand in the design of the car: Before Extreme E took off, she worked as a test and development driver for Continental.

Here, she was involved in developing the tires – but that ended when it became clear that she would be competing as a driver. After all, the conditions have to be equal for all the teams.

Nonetheless, Åhlin-Kottulinsky continues to take a special interest in the technical aspects of the race series, “The tires are really interesting this year because they contain recycled plastic bottles. They still perform fantastically though and we didn’t have any problems in Saudi Arabia, where we drove over difficult outcrops. It really proves that you can combine sustainability with performance.”

“I see myself as an ambassador”

Sustainability is an aspect on which Extreme E places a great deal of emphasis. With its events, the “global odyssey” not only wants to show spectacular races, but also point out problems and offer solutions with so-called “legacy programs” on site. These include tree planting, beach cleanups, and information sessions by the science team that accompanies Extreme E.

For Åhlin-Kottulinsky, this element of the race series is particularly important. On the one hand, she participates in Extreme E’s programs, while on the other also taking part in RXR’s own “Driven by Purpose” initiative to learn about local conditions: “We go to the sites and get to know the people. And for the legacy programs, we often partner with an NGO.”

One presentation by the science team in Greenland in particular stuck in her mind, Åhlin-Kottulinsky explains. It was about glaciers and how fast they are actually melting: “I knew there was a problem, but when you see the graphs, it takes your breath away – and we need to get the word out.”

The effects can already be seen now: “In Sweden, we used to have snow every winter, there was never any question about that. Today, that’s no longer the case. So we can see what’s happening at home, too – but it’s especially evident in the places we travel to.” Extreme E and its drivers want to bring these experiences to the outside world.

Next, Extreme E will be returning to Sardinia, where the “Island X-Prix” was held in Season one. There, the team planted numerous trees last year as part of the legacy program following the wildfires. “It will be interesting to go back there and see what it looks like now,” Åhlin-Kottulinsky says. With Chile and Uruguay, there are also a couple of new destinations on the schedule: “Cultures and countries I’ve never visited.”

In contrast, Extreme E has taken Åhlin-Kottulinsky to Saudi Arabia for the second time: “I really like racing there as a woman. When I go there and show that women can drive just as well as men, I feel like I’m doing something important,” she says. Women were prohibited from driving in Saudi Arabia until 2018.

Åhlin-Kottulinsky also wants to make a positive impression on the rest of the world: “I see myself as an ambassador because, in motorsport, I’ve often been the only woman. I want to be a trailblazer for young girls and try to inspire them to pursue their dreams. I want to show that motorsports, just like every other job in the world, is for everyone, regardless of whether they’re a man or a woman.”

This also fits in with her big goals. In terms of Extreme E, there’s no doubt: “The goal this year is to win the championship – the second time for Rosberg, but the first time for me.”

And what about the time after Extreme E? “My hope is that when I’m older, I can look back and say I made a difference, I contributed something to make this world a better place. That’s my very big goal,” says Åhlin-Kottulinsky. She notes that the experience with Extreme E has shown her the need for change: “We all want to carry on living the way we do. But we need to do it in a more sustainable way.” 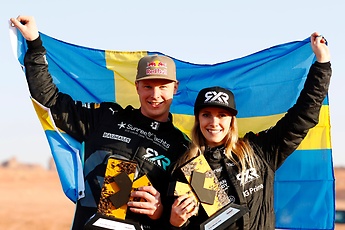