Double excitement in Sardinia – The Island X-Prix is coming up!

The wait is over! In just under a week, the double Extreme-E race day will get underway in Sardinia. There are two exciting races scheduled – plus a return to the legacy programs of the last visit.

Extreme E returns! And it was about time: The “Desert X-Prix” at the start of Season 2 finished several months ago. So it’s all the better that the double race day in Sardinia offers twice the excitement.

This is an interesting novelty for Extreme E, because neither Season 1 nor the young Season 2 faced the drivers with two races one after the other – and at the same location. This offers a chance to collect information over the week and adapt to the external conditions. And that could be the decisive advantage, because (as Extreme E fans know) it’s the details that count.

The track at the military base near Capo Teulada is about 4.3 miles long, and the very dry heat will face the teams with a brutal challenge. This means not only high outdoor temperatures, but also obstacles on the track, where the cracked ground poses a definite challenge.

You have to watch out for boulders or bushes at breakneck speeds while choosing the best route – because just as in the desert, there will be plenty of room to overtake. This will be a real test not only for people behind the wheel, but also for the electric Odyssey 21. But don’t worry: The car and its CrossContact tires are designed for just such challenges.

Before the start of the Iceland X-Prix, the current ranking looks like this:

We’ve already taken a closer look at the teams in the race for the title. You can find an overview of all the drivers here:

The race for the title – Part 1

The race for the title – Part 2

A return to the legacy project

The themes of “challenge” and “heat” aren’t limited to the races. Quite the reverse – Extreme E has made it its mission to draw the public’s attention to precisely those places that are facing climatic challenges – and to play a part in improving them.

Italy was hit hard by forest fires in 2021. Large areas were destroyed, many animals, people and plants were harmed. Extreme E aims to bring these issues into focus and raise awareness of the devastating consequences of climate change. Among others, Extreme E’s science team is there to gather new insights and educate people about the issues.

In addition, Extreme E is working with local NGOs and the MEDSEA Foundation to improve the situation – as it did in the first Season. This is divided into two areas: “Green Carbon” and “Blue Carbon.”

In the “Green Carbon” project, Extreme E is working to restore olive groves that were lost in the forest fires. In addition, Extreme E is running a local wildfire prevention campaign.

The “Blue Carbon” project, on the other hand, revolves around the conservation of seagrass in the Mediterranean Sea. “Posidonia oceania” sequesters harmful carbon, but is itself severely threatened. Last year, Extreme E scientists were already working with MEDSEA to restore the seagrass, and they will continue to do so.

Professor Richard Washington told us in an interview how Extreme E is dealing with the topic of sustainability, and which aspects will be investigated in the course of the racing series. You can find his insight here. 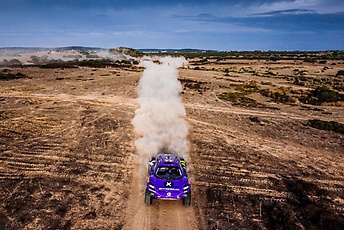