A premiere for Continental: Tour rolls through France for three weeks on PremiumContact 6

The 106th Tour de France for cycling pros, which will start next Saturday, July 6, in the Belgian capital of Brussels for the second time since 1958, is a very special occasion for Continental. Together with their additional partners LCL, E.Leclerc, Krys, and Škoda, Continental will for the first time be one of the five main partners of the world's most important bicycle race, the Tour de France. This means that Conti will not only be equipping a whole series of the 22 teams competing in the over 3000-kilometer-long "Great Loop" with racing tires for all weather conditions and topographical requirements, as it has already been the case for many years.

But the official vehicles of the Tour, which will be rolling through the country until their arrival at the finish line in Paris on July 28, will also be riding on Continental products. An event of this size and intensity, with worldwide attention over a period of three weeks, demands solid partners you can rely on. The Continental PremiumContact 6, which is produced in Sarreguemines, Lorraine, is mounted on the same Škoda cars that have accompanied the tour since 2004 as the best possible choice for all operating conditions.

And it all will begin with the legendary red lead vehicle of Tour de France director Christian Prudhomme. With its integrated infotainment screen, this limousine gives the crew all the latest information about the events of the race. Prudhomme and his crew are basically in contact with every single driver thanks to a radio connection. Their car, which often has a daily changing roster celebrities on board, even including France's President Emanuel Macron, becomes a digital control room on four wheels.

And this year, for the first time, Continental will be ensuring that only the best tires are good enough in the July heat, on both the dusty little mountain roads and on the wide national roads and freeways. Not only management's "red racer", but also the no less important escort vehicles of the timekeepers, doctors, and other officials will bear their passengers safely and comfortably through the countryside on Continental PremiumContact 6. The Groupama FDJ team will also hit the road with Continental tires. The event will be attended by an estimated 10 million cycling enthusiasts from all over the world who visit the circuit every year, as well as hundreds of millions of people by television or in the additional Internet live streams.

As one of the five main partners of the Tour de France, this year Continental will enjoy a high level of attention and presence at the daily "remise des prix", the awards ceremony for stage winners and wearers of the famous multicolored jerseys. Among them above all is the "Maillot Jaune", the yellow jersey of the leader in the overall standings. The Continental logo will appear both on the arch above the finish line and on the famous "red kite", the name given to the "flamme rouge" on the tour for decades, which indicates the final kilometer of the day's stage. 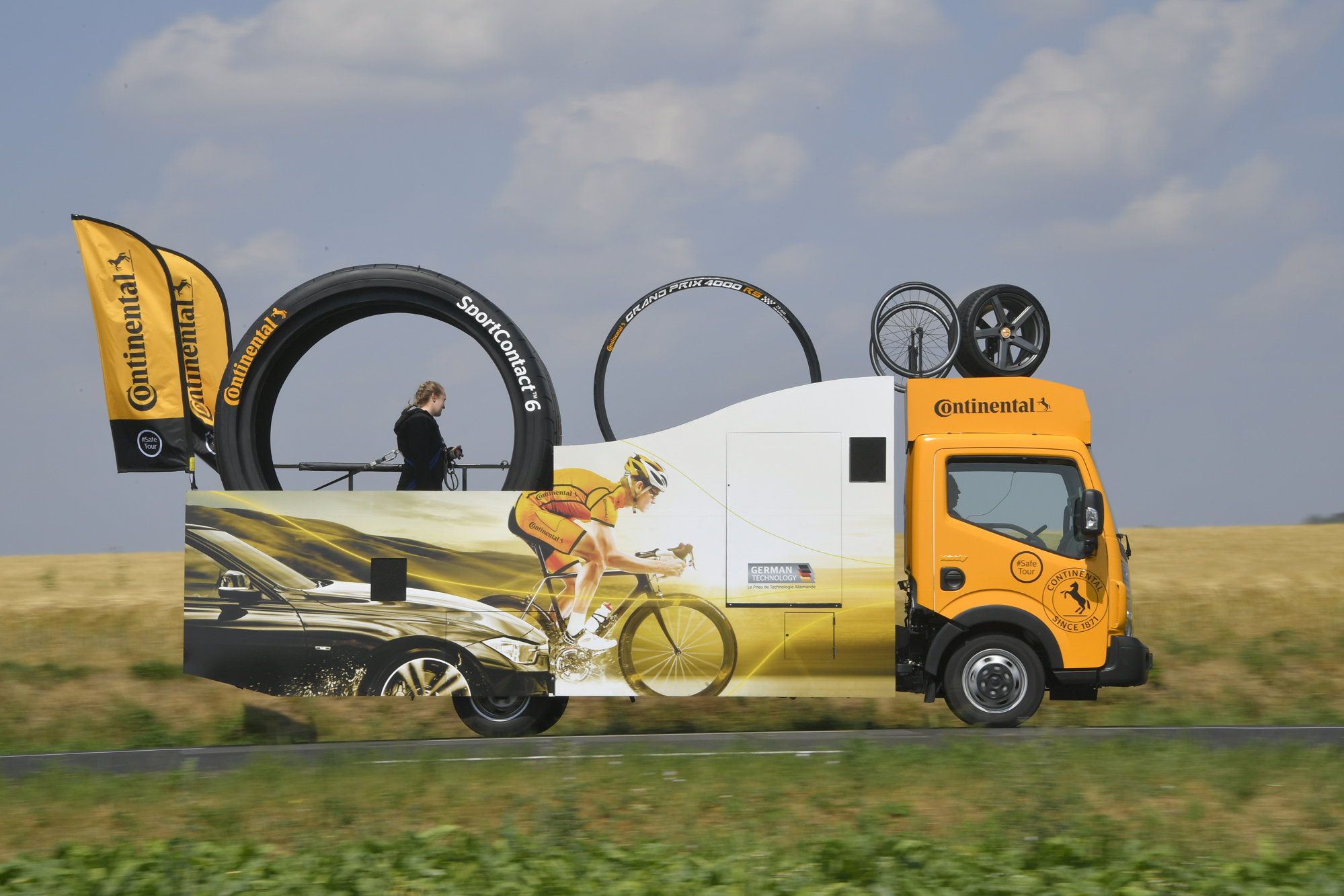 "Being a sponsor of the Tour de France is a perfect match for our products and corporate values," says Christian Kötz, Member of the Executive Board of Continental AG and Head of the Tires Division. As a stage-victory partner, says Kötz, "we increase the visibility of our high-performance tires, which stand for safety on the road and symbolize our winning mentality." Now, after a year as an "official partner" and official tire sponsor, the company is delighted to play a more important role in the world's biggest bicycle race. After each stage, a Continental representative will present the medal to the day's winner.

Continental is also using its partnership with the Tour de France to promote and inform the public about Vision Zero, the goal of a world without road casualties or accidents. The attention at the race will also be used this year to call for better partnership behavior and increased consideration between car and bicycle drivers. On its homepage, Continental also provides tour visitors with information on how to safely travel to and from the best locations for spectators. Free tire checks for cars parked there are also offered during the daily stages.

Continental's WorldTour commitment to bicycle racing also ensures that PremiumContact 6 will not only be safe passenger car tires, but also racing bicycle tires on the wheels of the world's best professionals. This year, that also includes the successor to Team Sky, who with Chris Froome and Geraint Thomas have been the overall winners over the past few years. "Team Ineos", Sky's heir, despite Froome's retirement from the tour after his serious accident a few weeks ago, will do everything in their power to make the most successful use possible of Continental Bicycle Tires. However, the exact makeup of the team is as yet to be determined.

This is also the case for the other Continental partners. Only a few of the 22 teams, with a total of 176 riders who will start next Saturday, have already announced their line-ups. But many potential stage winners, or hopeful wearers of the jerseys for the overall leader (yellow), the best sprinter (green), the best climber (white with red spots), and the best young professional under 25 (white), will still be part of teams riding on high-performance Continental tires. This year, in addition to the British team Ineos, that will be Bahrain Merida (BRN), Groupama FDJ (FRA), Katusha Alpecin (SUI), Movistar (ESP), and the German team, Team Sunweb.

This year's start in Brussels will be marked by special emotion. It's not without reason that the Belgian capital was chosen this year as the metropolis hosting the massive spectacle that kicks off every Tour de France: exactly 50 years ago, Belgium's cycling hero Eddy Merckx celebrated his first of a total of five triumphs at the Tour de France. For Christian Prudhomme and his team, this was one of the reasons why the capital city of the European Union was chosen as the starting point for the second time since 1958.