More thrills than in any recent edition: The “Continental Tour” gets up to speed

The favorites in this 106th edition of the Tour de France sure took their time before showing their true colors. But then came the Pyrenees, the individual time trials in Pau, and a dramatic duo of tough stages (numbers 14 and 15) and in next to no time the general classification (GC) had been thoroughly shaken and stirred. This year’s Tour is definitely serving up more thrills than many of its recent predecessors. And that’s due in no small part to the riders in the teams equipped with Continental racing tires.

In the meantime, riding on those Continental tires, last year’s winner Geraint Thomas from Team Ineos has secured second slot behind the man in yellow, France’s Julian Alaphilippe, trailing by just 1 minute 35 seconds (1:35). Three places behind him in overall fifth place and at 2:02 from the race leader is Thomas’s young Columbian team mate Egan Bernal. As the best young professional in the field, the 22 year-old South American is currently riding in white. Second in the young professionals’ classification is France’s Davis Gaudu from Groupama FDJ, another team that has put its trust in Continental rubber.

Spanish-based Team Movistar, also riding on hand-made Continental tires from Korbach have shifted into attack mode as well. One Movistar rider who made his mark on the challenging, mountainous, rain-drenched 15th stage that took the peloton from Limoux up to Foix Prat d’Albis was Spain’s Mikel Landa who finished third. He also claimed the prize for the day’s most combative rider.

Landa (7th) and his compatriot Alejandro Valverde (8th) go into the second rest day on the Tour in the GC top ten. At 4:54 and 5:00 behind the yellow jersey respectively, both men still have every chance of at least competing for a place on the GC podium in Paris. At the same time, a young German rider who no one was reckoning with has also emerged among the top ten: Lennard Kämna from Team Sunweb is also racing on Continental tires.

The previous day, however, it was a French rider on Continental tires who thrilled the host nation: This year, July 20 proved to be something of a second national day of celebration for the French. Just six days after July 14, which every year marks the storming of the Bastille in 1789, a second wave of patriotic feeling washed over the nation of bike racing fans. At the heart of the matter was a young man from a Tour de France team who powered his bike on its Continental tires to the greatest success of his career to date.

29-year-old Thibaut Pinot from the Groupama FDJ team proved the strongest finisher in a six-man breakaway group on this ultra-tough 117.5-kilometer stage in the Pyrenees from Tarbes up to the highest paved mountain pass in the Franco-Spanish border region, the legendary 2,115-meter Col du Tourmalet. Groupama FDJ also managed to place a string of support riders up the rankings and they will doubtless be looking to feature prominently in breakaway groups before the Tour heads into the Alps. Needless to say, they are not the only ones with top ten finishes in the upcoming stages in mind, as the riders from Bahrain-Merida, Katusha-Alpecin, and Team Sunweb will also be pushing for their moment of glory on their Continental tires.

As for Pinot, after his masterful ride up the Tourmalet and with the tough Alpine stages coming up this week, he now has every chance of battling for the polka-dot jersey of the King of the Mountains in this edition of the Tour. With 50 points to his credit, the Groupama-FDJ rider is just 14 points adrift of Belgium’s Tim Wellens who currently rides through France in the coveted jersey with the bright red polka dots.

In the Pyrenees, the teams riding on Continental racing bike tires provided ample proof of their exceptional capabilities. On the rain-hit 15th stage, three teams on Continental tires – Ineos, Movistar und Groupama FDJ – filled the first three places. Added to which, the Spaniards in the Movistar team secured the top slot in the GC team rankings.

But it’s not only the riders who get a chance to recharge their batteries on the second rest day. The official Tour vehicles that have been running on their Continental PremiumContact 6 tires ever since leaving Brussels on July 6 will be given a check-up too. This of course also applies to the eye-catching red Skoda Superb of Tour Director Christian Prudhomme, who signals all the rolling starts from the purpose-built sunroof of his car.

This year there are more than 320 Skodas accompanying the Tour on Continental PremiumContact 6 tires, including all the official organization cars. Continental’s corporate colors of yellow and black have been an ever-present feature of the first two weeks of the Tour in both Belgium and France − above all at the awards ceremonies and on the final kilometer of each stage. At the same time, the “caravane publicitaire” – the brightly colored, noisy cavalcade of promotional vehicles that trails along the route two hours or so ahead of the riders – includes some beautifully turned out demo vehicles carrying giant stylized Continental tires.

In the days ahead, as the thrilling 106th Tour de France draws to a climax, they will all get to see how the teams on Continental racing tires contribute to the decisive moments when ultimate winner of the world’s greatest bike race is determined, and the specialist jerseys are won or lost. 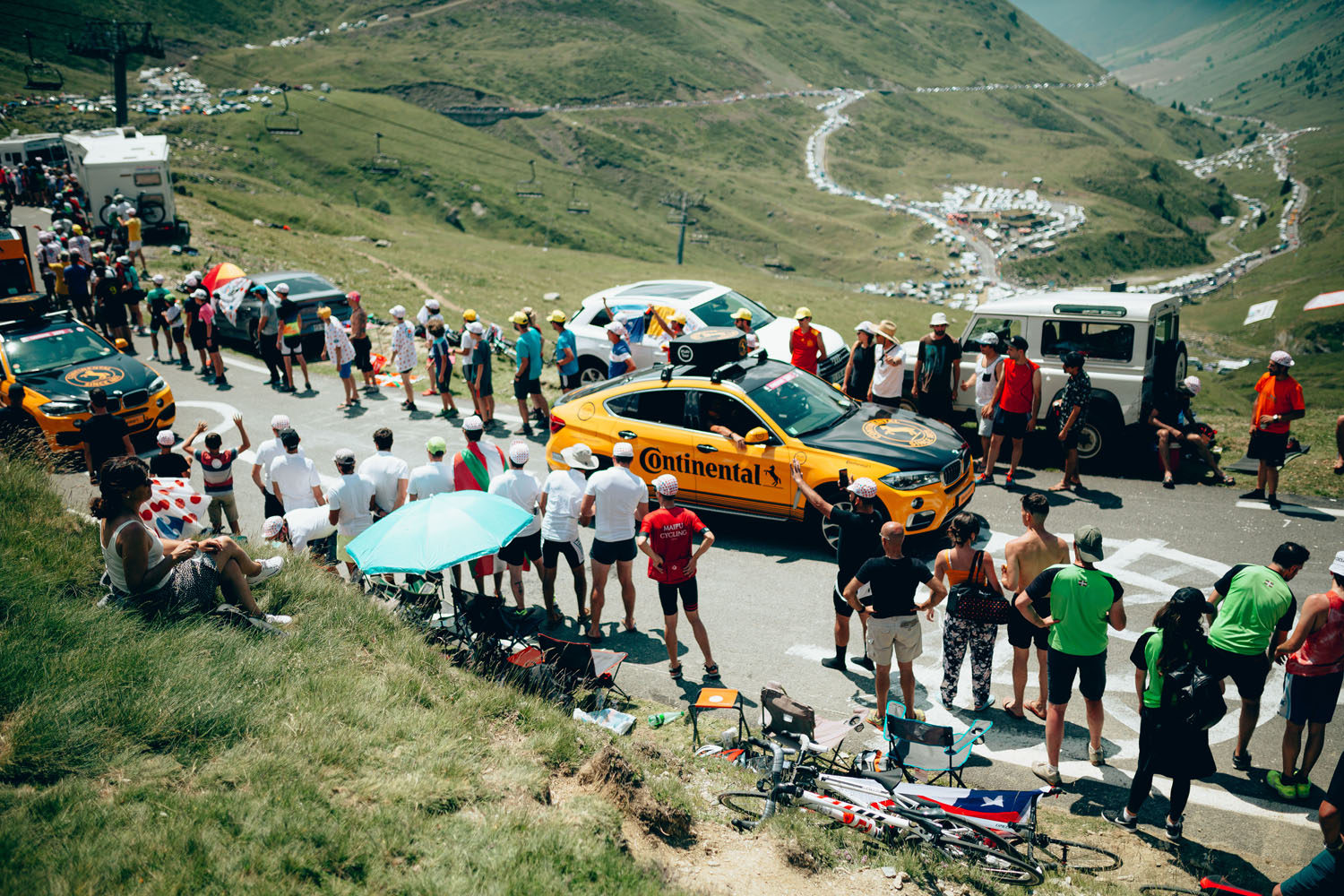